Maybe you’ll catch a glimpse of the Mayor’s now-famous iPad! 😉

One of the goals for the lecture series is to provide the entire sophomore class with a shared experience that sparks campus-wide conversation and debate about important issues of the day. This new series can be viewed as a first step towards adapting aspects of the legendary “Great Issues” concept instituted by former Dartmouth President John Sloan Dickey for a new generation.

President Kim will be delivering a second lecture in the series—on the importance of developing “habits of the mind” that are key to success—at 4 p.m. EDT on Thursday, July 29. This lecture will also be broadcast live online. 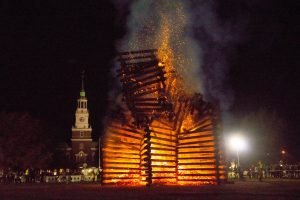 A Celebration of Light