Below is the Report of the 209th meeting of the Dartmouth Alumni Council which was held in Hanover, October 23-25, 2014.

If you have any feedback or questions, please don’t hesitate to contact me and I will forward your concerns back to the College. In the meantime, I wish you all the best for the Holiday Season!

Report from the 209th Meeting of the Dartmouth Alumni Council

When we return as Alumni Councilors to Dartmouth each fall and spring, our primary responsibilities include serving as the eyes and ears of our classmates and other constituents. During those two days on campus, we are fortunate to have access to senior administrators, faculty, and most importantly, students, all in an effort to take the pulse of the Dartmouth community and to ask questions – sometimes pointed ones.

And so it was in that spirit, and with that mandate, that the Dartmouth Alumni Councilconvened its 209th Meeting in late October.

To the extent there was a headline for our fall session, it was the activity surrounding President Phil Hanlon ’77’s initiative known as Moving Dartmouth Forward.

For those not familiar with this initiative, it began with a plea by President Hanlon last spring, in which he asked “everyone at Dartmouth to work together to end high-risk and harmful behavior on campus that is hurting students, dividing the community, distracting the College from its core mission, and compromising its vision for the future.”  Specifically, a Presidential Steering Committee was charged with recommending actions “to end high-risk and harmful behavior in the following three critical areas: sexual assault, high-risk drinking, and lack of inclusivity.”

During the dinner that opened our fall convening, we heard from Barbara Will, the A. and R. Newbury Professor of English; and Sue Finegan ’85, president of the Association of Alumni, about the wide net the committee has been casting – in terms of the feedback it has solicited and the ideas it is considering.  Barbara and Sue explained that the committee has engaged with people across the Dartmouth community, consulted extensively with experts, and carefully examined best practices.

We were told that comments and suggestions continue to be considered and evaluated – below are instructions on how alumni can still have their voices heard – and that the final recommendations of the Steering Committee will be made to President Hanlon in January.

Following the Alumni Council meeting, the Steering Committee provided an update to the Board of Trustees at its early November meeting.

What follows are some other highlights from the 209th Alumni Council Weekend:

The Admissions Office is encouraging more alumni to sign up to serve as alumni interviewers.

In a lengthy Q&A session with Alumni Councilors, President Hanlon showed himself to be first and foremost a teacher. He had come to us directly from teaching Math 11, his voice admittedly raspy from chalk dust (no PowerPoint for him, at least not this day). Among the points he made to us was the importance of Dartmouth students graduating not only with “critical-thinking and analytical skills” but the ability to think “creatively.” He also spoke of his ongoing “Cluster Initiative,” which will pull together interdisciplinary teams of faculty – in part by drawing on roughly half of a record $100 million anonymous donation announced last spring.

Those alumni who believe Dartmouth should be in the forefront of graduating budding entrepreneurs would do well to visit the DEN (Dartmouth Entrepreneurial Network) Innovation Center, if only virtually. Our opening reception was set at the new, brick-and-mortar headquarters of this exciting effort, and we later heard from Jamie Coughlin, director, New Venture Incubator Programs and director, DEN Innovation Center.

On a similarly progressive note, we heard from F. Jon Kull ’88, Rodgers Professor of Chemistry and dean of graduate studies, and Joshua Kim, director of digital learning initiatives, who gave a faculty perspective on digital learning initiatives. You can learn more about professional development for Dartmouth faculty here.
As has been conveyed earlier, there are changes afoot at the Tucker Foundation – which is basically splitting into two: the Tucker Center for Religious and Spiritual Life and the Dartmouth Center for Service. Interim Dean of the Tucker Foundation Theresa Ellis ’97 addressed the Council, and you can read more about these plans here.

On Saturday morning we heard from Bill Helman ’80, the new chair of the Dartmouth Board of Trustees, and Emily Bakemeier ’82, a member of the board who chairs its academic affairs committee. For those who have not had a chance to hear Bill speak, he is bracingly blunt when asked what he believes Dartmouth does well, and where it might improve. And Emily’s background is unique. She serves as deputy provost of Yale and is a former president of the Dartmouth Alumni Council. You can learn more about the current Dartmouth Board of Trustees here.

Finally, Mark Davis ’81, ’84Tu, chair of the Alumni Liaison Committee (ALC), which serves as a communications conduit between the alumni body and Trustees, gave the Council an update on the work of the committee and the newly released 2013-2014 ALC Annual Report. You can read that report here.
Mark Davis and Lou Spelios have asked that we end this correspondence by posing a common question to every alumnus:
During our meetings, we learned about the new Living Learning Communities at Dartmouth, which are opportunities for students to live in the dorms with other students with like interests, such as a language or a co-curricular activity.  What do you think of this idea?  Would this have bettered your Dartmouth experience if it was available to you? 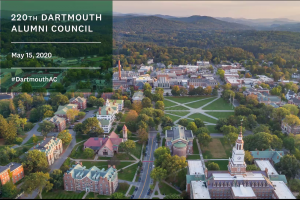 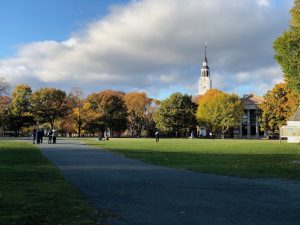 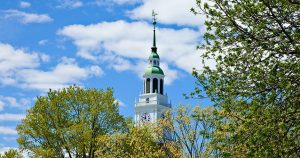